The first electric vehicle charging network operating in Greece by Blink is a reality.

The charging network and e-mobility technologies by Blink at an event in Zappeion, with the support of the US Embassy in Greece

The Ministries of Environment & Energy, Infrastructure & Transport and Interior participated.

The charging network and e-mobility technologies, developed by Blink throughout Greece, were presented during a special event, organized by Blink Charging Hellas, with the support of the US Embassy in Greece, in Zappeion Megaron in Athens, on the evening of Wednesday July 15, 2020, with the slogan:

“Charging the future. Connecting the world!”

Blink Charging Hellas announced that the charging network of Blink electric vehicles in Greece already has charging points every 50 kilometers from city to city. It covers the needs of both urban and long-distance electric transportation and is constantly enhancing and expanding, so that each urban center has at least 50 charging points.

“I want to assure you that the United States will continue to partner with Greece on its sustainability initiatives, and I certainly look forward to seeing more electric vehicles on Greek roads and Blink charging stations across the country – of course here in Athens but also in Thessaloniki,” Mr. Geoffrey R. Pyatt, Ambassador of the United States of America to Greece, remarked during his greeting speech, underlining “the strong US-Greece trade and investment relationship.” In particular, he noted that: “Blink Charging is a U.S. leader in EV equipment and stations, and it will ease the adoption of electric vehicles around the world while helping to reduce gas emissions and noise and meet critical environmental targets.  In partnership with EUNICE ENERGY GROUP (EEG), Blink Charging has deployed technologically advanced applications and products that make up a nationwide network of charging stations.  Blink aims to export its technology all over Europe, beginning with its investment here in Greece”.

Mr. Pyatt went on to say: “And in this regard, the project that we’re launching today is a demonstration of confidence in this country’s future and Prime Minister Mitsotakis’ business-friendly orientation.,” and added: “We welcome the Greek government’s proposed legislation to offer financial incentives for individuals and corporations looking to purchase electric vehicles and charging equipment”.

“it is a tremendous honor and a pleasure for me to be here with you this evening, and I want to thank Blink Charging Hellas, EUNICE ENERGY GROUP, and Blink USA for inviting me to speak.” He highlighted that:

“Partnerships like this demonstrate what you get when you work with American companies: U.S. technology and innovation, transparency, local hiring, and cutting-edge solutions to tackle pressing economic and environmental challenges.”

“We Create, We Invest, We Innovate…”

“The first network for charging electric vehicles operating in Greece by Blink is a reality. It extends from Crete to Thrace. It already covers the entire Greek territory and the drivers of electric vehicles can move without any problems”, Mr. Georgios Kalavrouziotis, President and CEO of Blink Charging Hellas, announced and emphasized that “the Blink network embodies Greece in the European and global electric network”.

“We create, invest, innovate, thus contributing to the economic development of the Nation”, Mr. Kalavrouziotis stated, noting that the joint venture with Blink is a tangible example of a strong business alliance between Greece and the United States of America, at the peak of technological energy developments, as well as of energy transition, since it combines the benefits of e-mobility and pure green charging energy.”

Mr. Kalavrouziotis announced new applications and products, which connect e-mobility with the new generation networks and the most modern protocols of information and telecommunication technologies, which integrate artificial intelligence and IOT technologies, so that each user can self-manage the clean energy, which he himself produces, consumes, stores and uses to charge his electric car, as he said “with a fixed route towards the technological future of energy, which changes people’s lives and leads to their energy independence and energy democracy”.

He also referred to “the participation and cooperation that has been developed, in the core of the action group, of the American-Hellenic Chamber of Commerce, with the support of the distinguished Ambassador of the United States of America in Athens for the implementation of mutually beneficial American investments in Greece”.

He also stressed “the special role played by Mr. Geoffrey R. Pyatt in launching the US-Greece strategic dialogue, to strengthen and deepen our bilateral relations and to attract leading technology and innovation companies such as Cisco and Pfizer, to invest in Greece and assist in the country’s economic recovery”.

Referring to the government’s legislative act on e-mobility, which is being discussed in Parliament, Mr. Kalavrouziotis said that “it decisively enhances the production and installation of charging infrastructure” and that “it is an important institutional intervention to promote e-mobility and the transition to green transportation.”

Message of support and cooperation from the USA

“It is a very important moment for us. We are proud to share the technology and the lessons learned from the development of Blink and electric vehicle charging infrastructure in the United States, with Greece, for the development and promotion of e-mobility in your country” Michael Farkas commented, Founder & CEO of Blink Charging Co. America, sending a message of support and cooperation.

At the same time, by connecting the lessons learned from the Covid-19 pandemic with the support of environmental protection decisions, he emphasized that:

“The data of this period have further strengthened our commitment to cleaner transportation alternatives, such as electric vehicles. The cleaner air and the reduction of pollutants, produced by the means of transport, during the recent period of staying at home, motivate us and push us towards a stronger future in the field of e-mobility”.

E-mobility without green energy is a “dead letter”

The chargers used by Blink for the development of its network are manufactured, installed and maintained in Greece by the Greek energy group EUNICE ENERGY GROUP (EEG), exclusively for the Blink network, Mr. George Pechlivanoglou, technical director of Blink Charging Hellas, commented.

He added that they have been certified with the highest European certificates of high expertise and quality equipment, in order to include Greece in the leading European Hubject electric network, which is connected to more than 250,000 charging points in Europe and the USA and, by being compatible with the international Roaming Hubject standard and the global Blink platform, they are a pillar of the e-mobilized tourism development.

He also noted that this is technical infrastructure with prospects for continuous future upgrade and development, as they support all future communication protocols with the next generation of electric vehicles and V2G technology, which will allow the sale of energy from the vehicle to the network and, for the first time, offer the possibility for revenue from electric vehicles on behalf of their owners.

“The Blink Charging Network is the first 100% Green Charging Network in Greece, but also one of the few in Europe”, Mr. Pechlivanoglou commented, referring to the cooperation of Blink Charging Hellas with WE ENERGY, a subsidiary of EUNICE ENERGY GROUP (EEG), which is the first and the only Greek provider of 100% pure green electricity, characteristically noting that e-mobility without green energy is a “dead letter”.

He presented the development plan of Blink in Greece for the next two years, aiming at the general improvement of infrastructure in urban centers, as well as the expansion to all cities, ports and islands of the country.

He also referred to the collaborations, which are developed with commercial groups, the local government, representatives of the automotive industry and other bodies for the development of the green charging network of Blink’s electric vehicles.

In the context of the event, the collaboration between Blink Charging Hellas and Nissan N.I.Theocharakis SA was announced, which concerns the development of the charging infrastructure and e-mobility technologies provided by Blink in the network of the automotive industry, being a leader in the promotion of quality electric vehicles in the market.

On the occasion of the cooperation, Mr. Takis Theocharakis, in a short greeting speech, stated that:

“It is with great pleasure that we announce today our cooperation with Blink as our main partner in the new era of e-mobility. As a pioneer in the automotive industry, Nissan is working methodically and systematically for a future of sustainable mobility without carbon dioxide emissions. Through this cooperation, our goal is to expand our choices in electric vehicle charging solutions, both at the level of our dealers and at the level of the final consumer, that is, our customers. So, we are confident that this cooperation will be very successful and you can be sure that we will contribute with all our forces in this direction”. 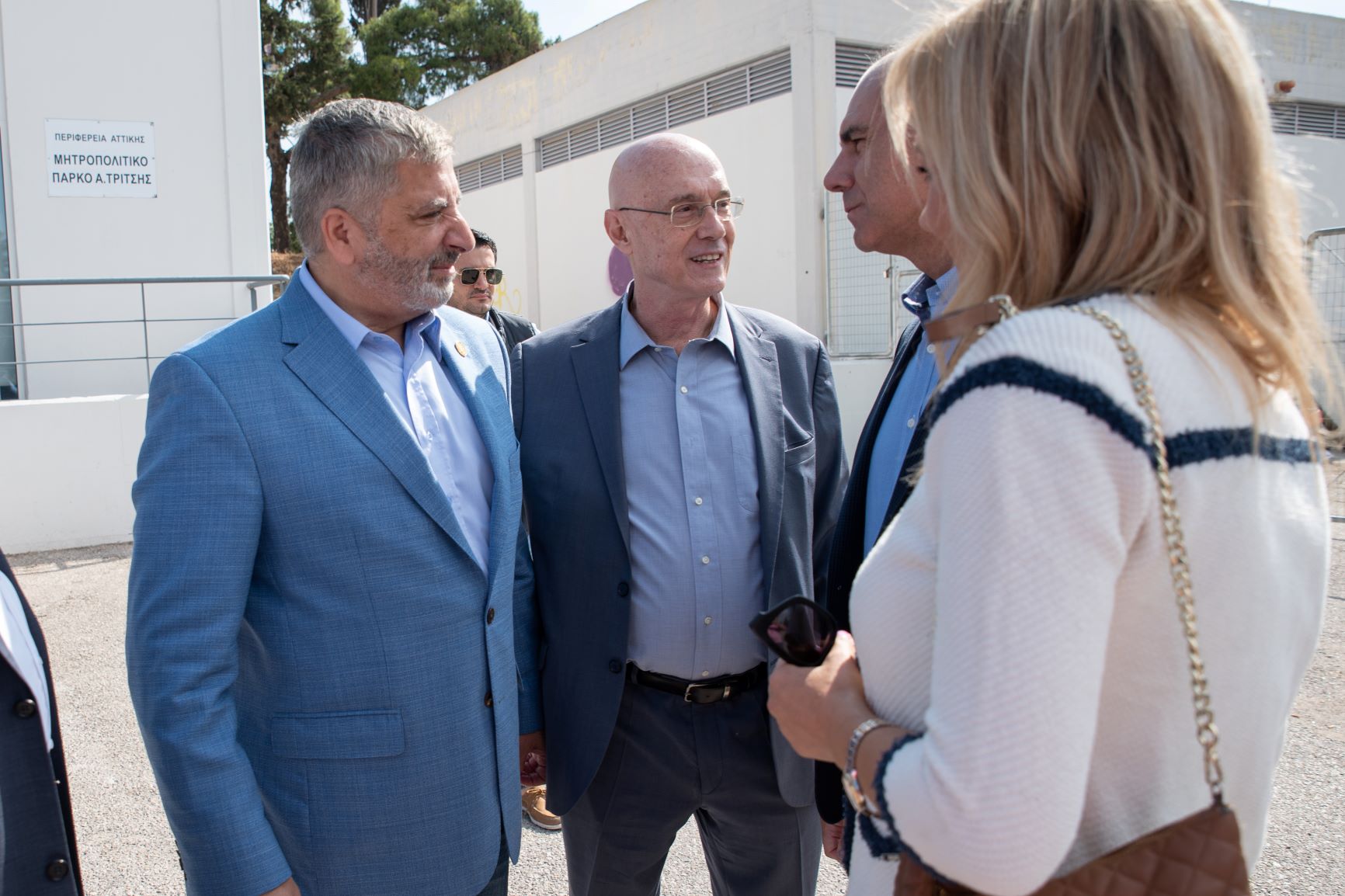 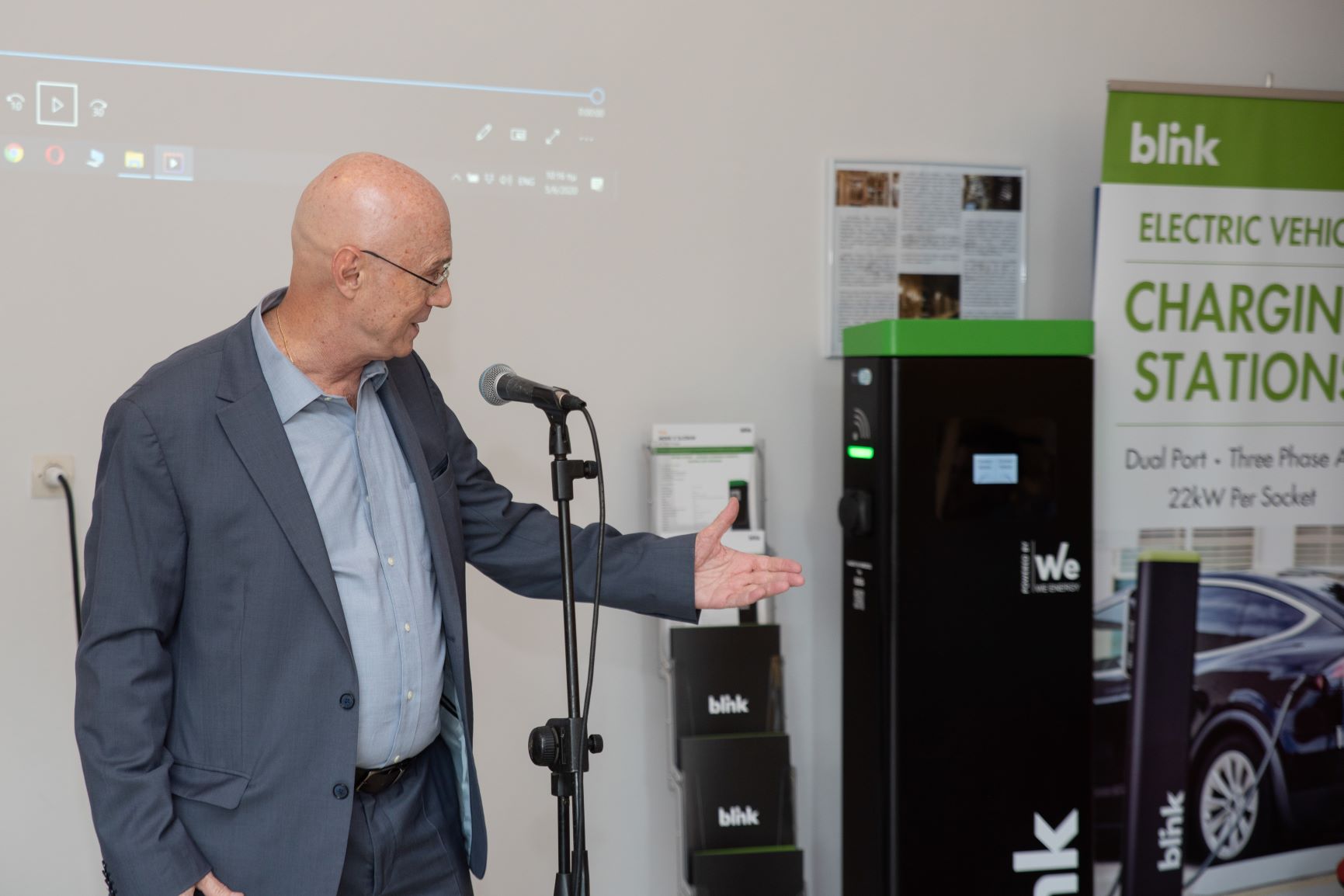 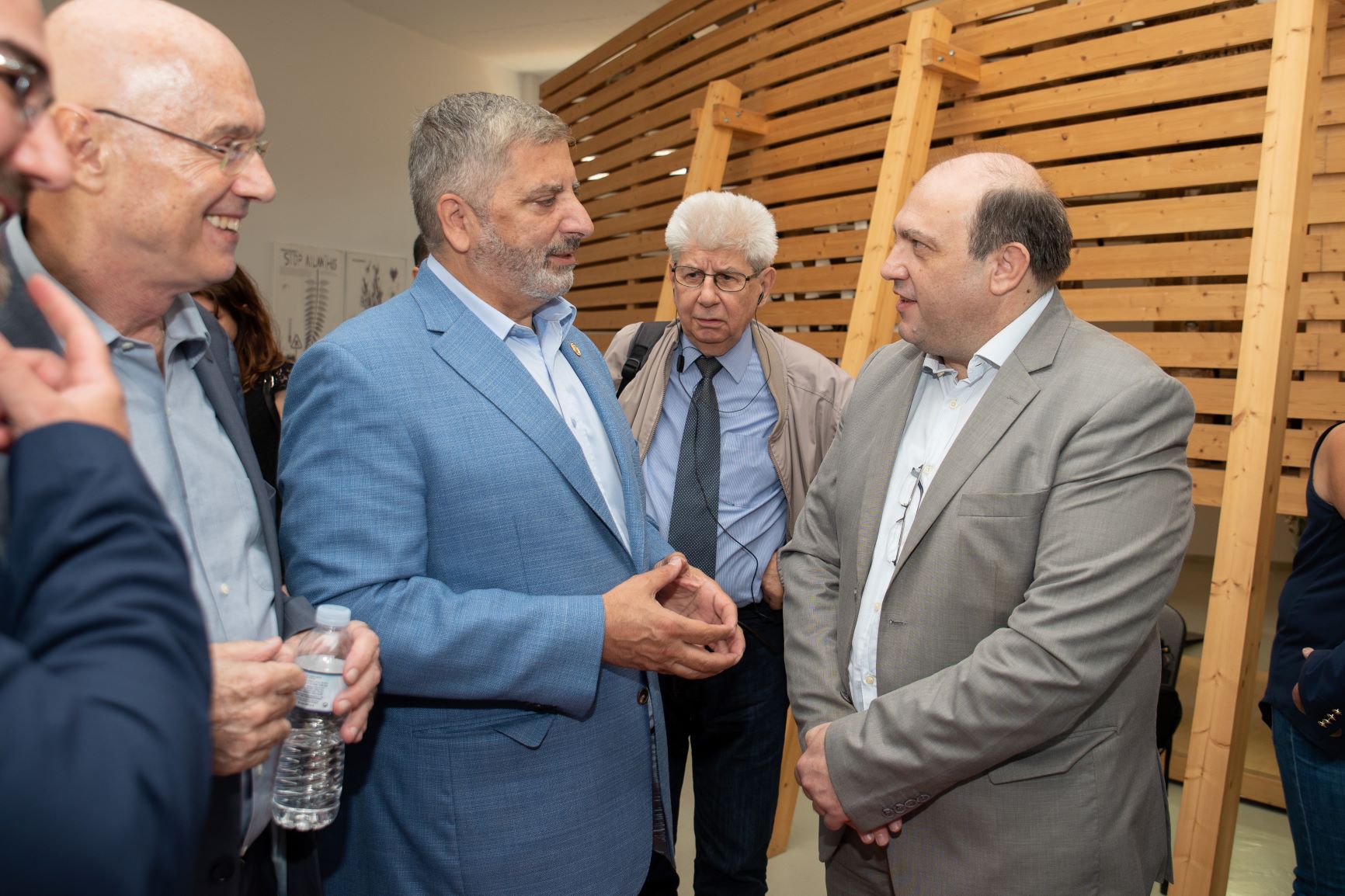 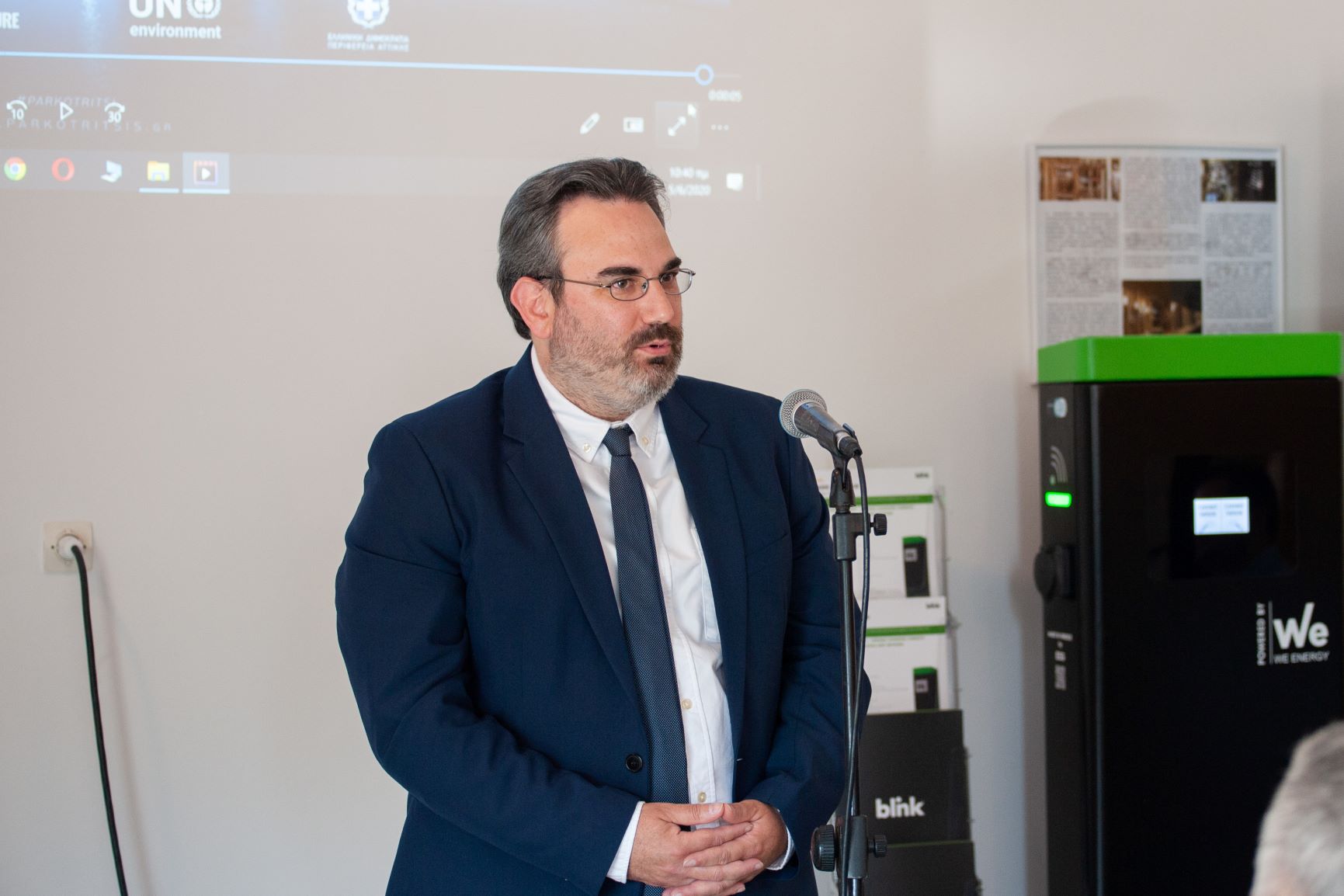 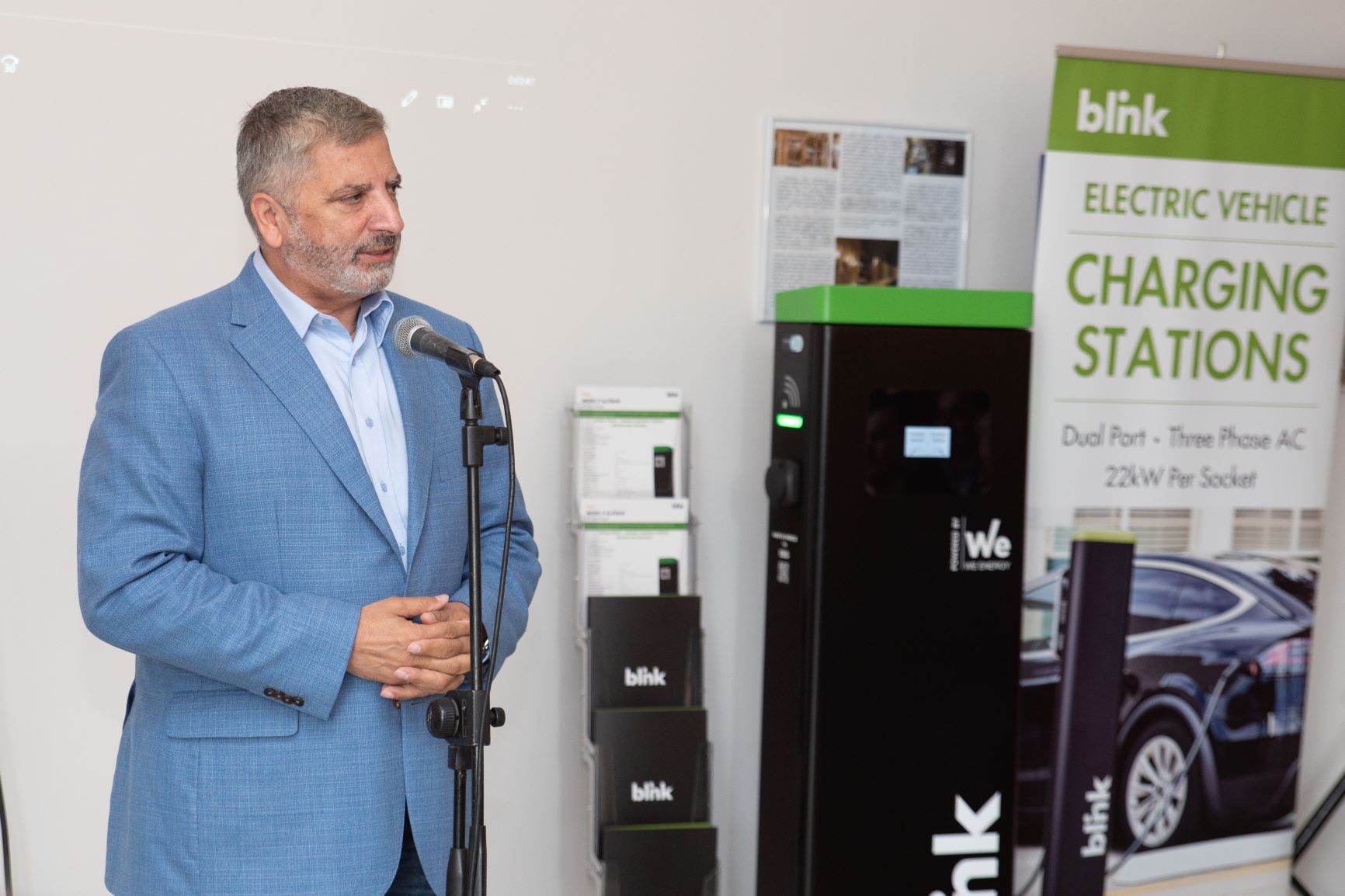 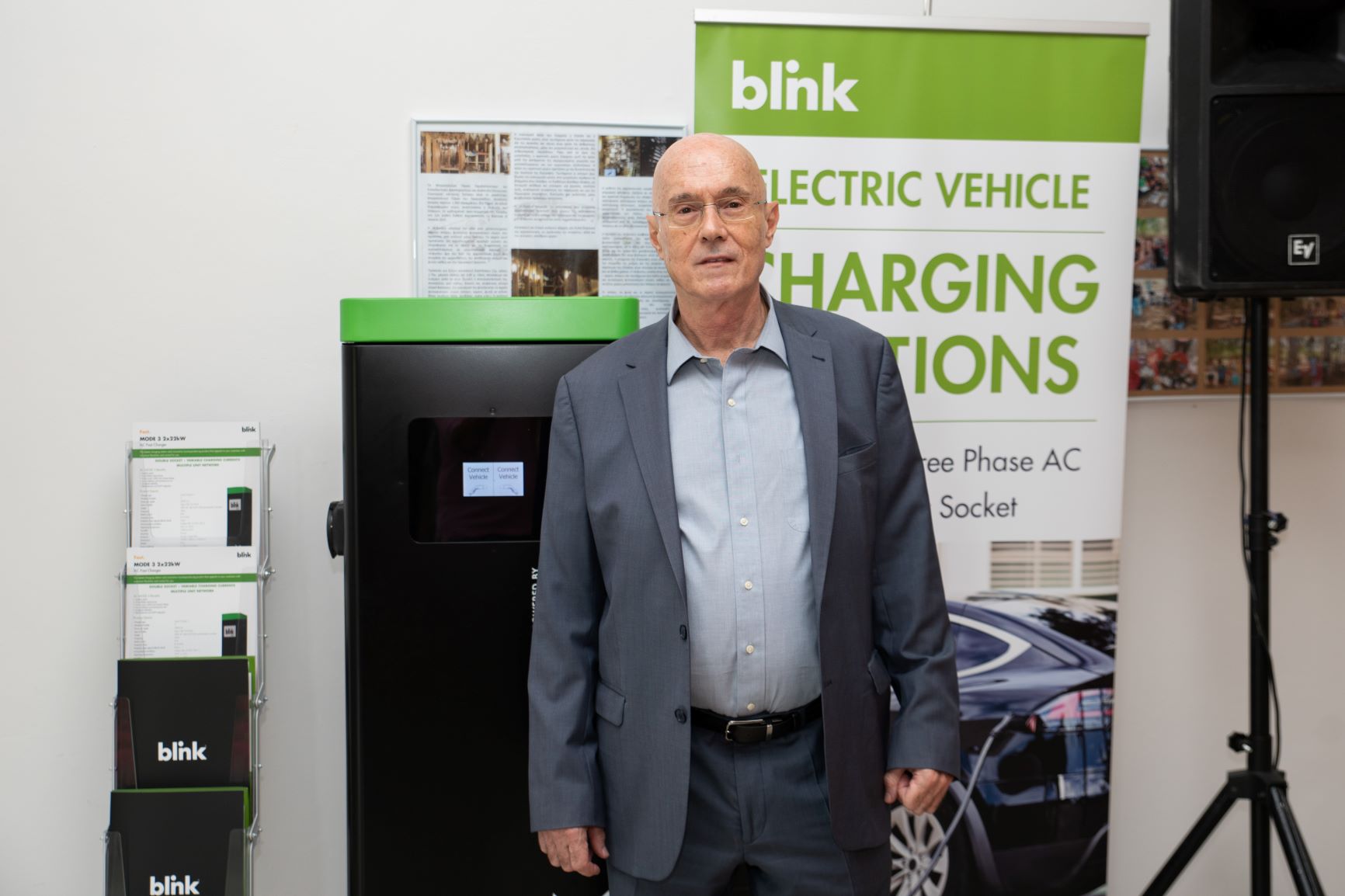 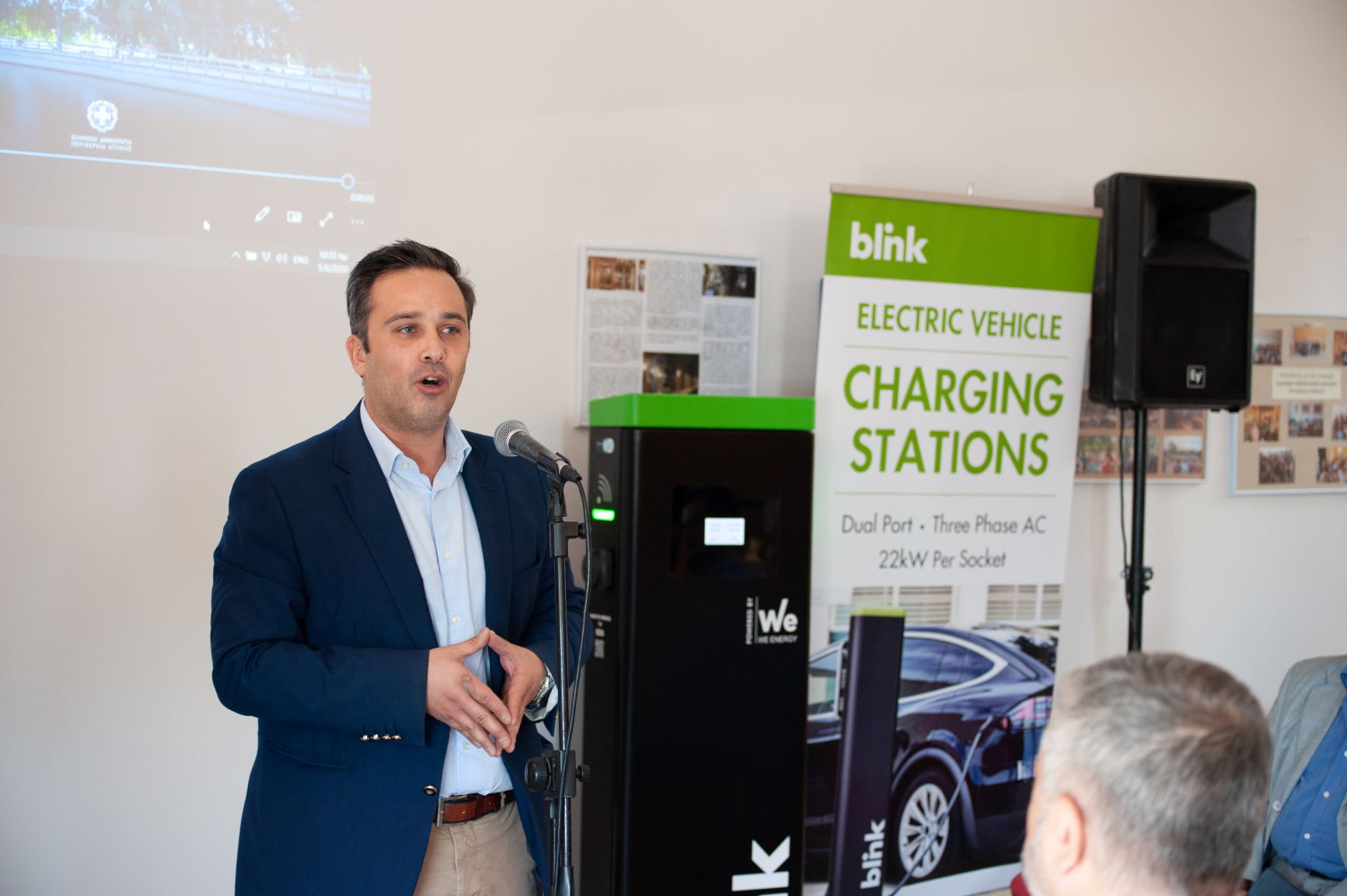 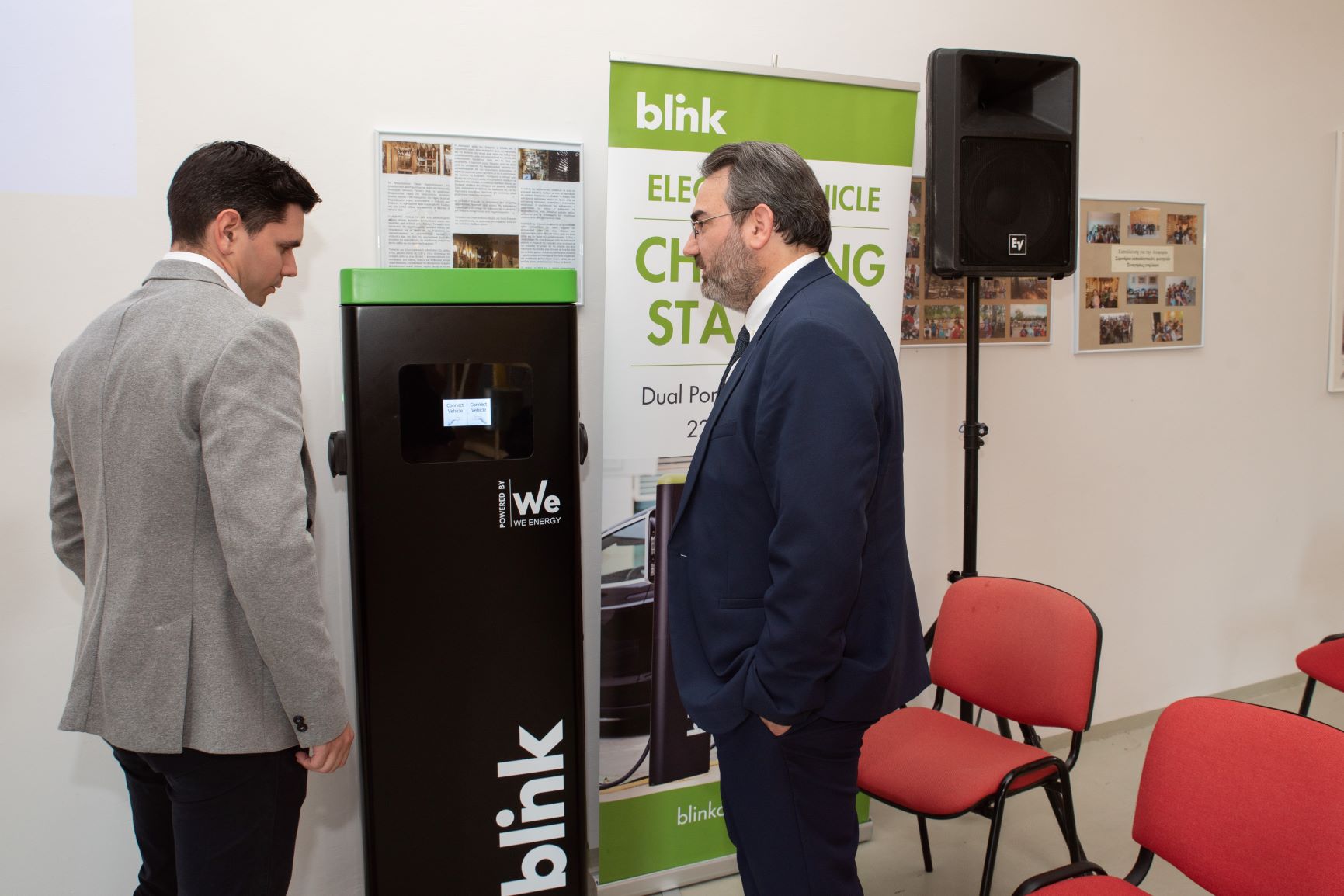 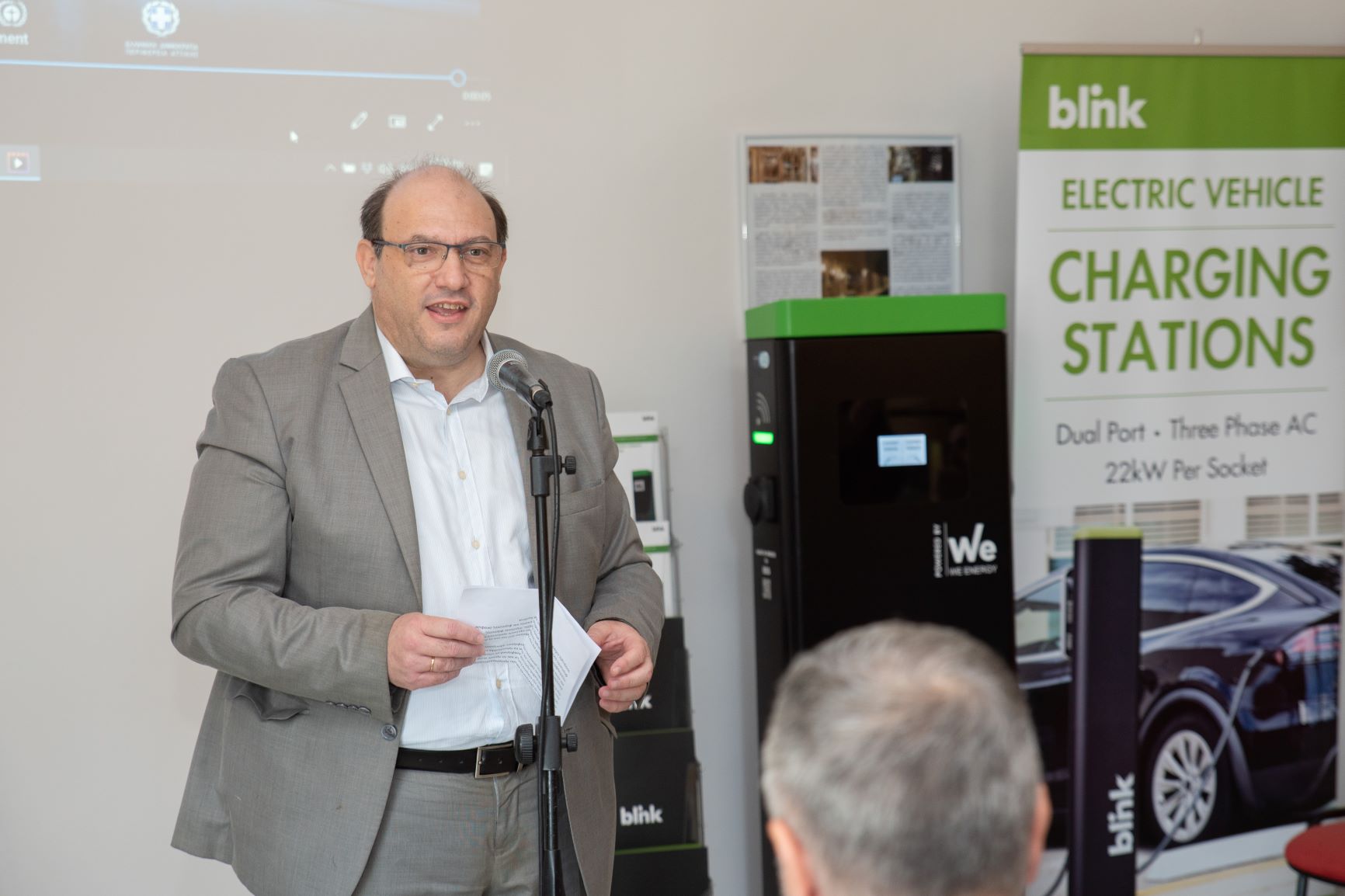 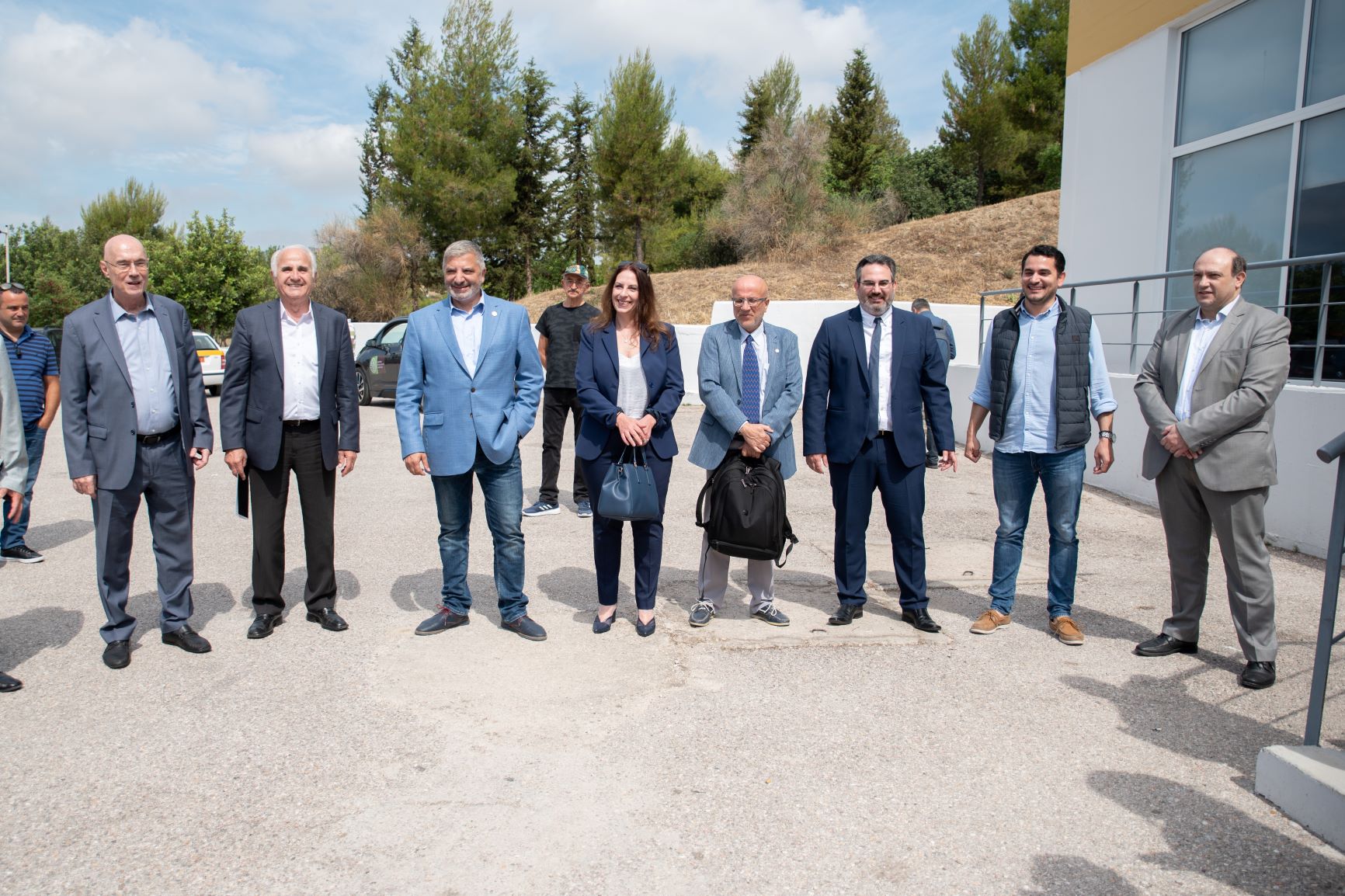 Newer EEG`s Energy Storage Unit at the front line of the large projects of the Just Development Transition Plan.
Back to list
Older EEG & BLINK at Tritsis Park for the Global Environment Day
ALL OUR NEWS IN YOUR NEWSLETTER